These are a few of the Lolita Style that i was planning to try on.. xD 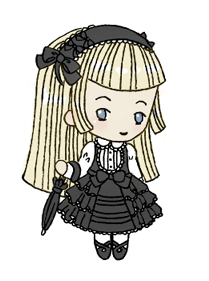 Gothic Lolita
Although the name 'Gothic' Lolita alludes to goth fashion as a whole, the style is primarily influenced by victorian inspired goth style and not cyber goth or industrial style.
A Gothic Lolita outfit like all Lolita styles, is very modest in today's standards. As with other Lolita styles a Gothic Lolita outfit can usually be recognized by the bell-shaped skirt, and puff-sleeves. A Gothic Lolita outfit is usually comprised of black or rich dark colors such as burgundy, purple and navy. It is common for this style to involve details in complementary or contrasting colors, such as the infamous black and white coordination choice.